In 1908, a handful of Christians joined together to organize a church in a little town that had only a few scattered houses. Buying a site at the corner of 61st and Central Avenue, they built a one room frame structure which served as the church until the 1960’s. For a while, the church was a mission of Centennial Baptist Church of Washington. In 1910, the church became known by its present name, the First Baptist Church of Capitol Heights. The present building was dedicated on September 28, 1952.

On January 1, 1991, First Baptist Church burned — the fire was devastating to the inner sanctuary but the foundation stood firm. The Mayor of Capitol Heights allowed the congregation to hold worship services in the Town Hall, keeping the church family together. The first return service in the building was a devotional service on September 12, 1993.  From its humble beginnings, First Baptist Church has sought to be a neighborhood church, even through the racial/ethnic changes of the 1960’s.

Called to Serve
Mr. William Collins led the church for a period of time until the call of Rev. Austin Authur as the first Pastor. Following Rev. Authur who left in 1917, Rev. Charles Sheets was called and ordained and served until 1920. There were also others called to serve:

Rev. Harold L. Dugger, Sr., our beloved current Pastor, accepted the call in August 1999 to serve as the Associate Pastor and was elected as Pastor of First Baptist Church of Capitol Heights on October 22, 2000. Pastor Dugger is a devoted husband and father, a skilled Preacher/Teacher and Minister of the Gospel of Jesus Christ.

Join Us For Service 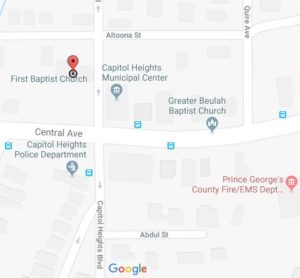